The information below was presented as part of the 160 year anniversary of St. George the Martyr in 1999. Below is a copy of the actual article with accompanying pictures.

An important part of Toronto history & The Grange Community.

A human story – full of drama, history, caring and worship…

The Anglican Church has been part of life in Toronto since the beginning. On January 6th 1839, a fire consumed the stone Church of St. James. This fire is considered to be the origin of St. George the Martyr, which opened on November 9th, 1845. Toronto had a population of 18,000 by 1844, and it was felt that more churches were needed to serve the growing city.

The land was donated by the Boulton family – whose former house now adjoins the back of the AGO. Architect Henry Bowyer Lane gave the church a gothic, cathedral-like character, seating 750, with a gallery across the western end. The 150 foot spire could be seen by ships from the lake (the shoreline was much closer then as well) and was used for navigation. The parish school, the site of the current church, was built in 1857 and the rectory (or clergy housing), in 1865.

It was “a popular church… often exceedingly difficult to secure sitting accommodation”. By 1888, there were more than 400 children in two Sunday schools, plus charity missions, a home for the aged, an orphanage, a camp and other worthy projects. Those efforts continue today with many groups using the facilities for meetings and counselling. Cultural groups such as the Music Gallery also use St. George’s for performances. Unfortunately, a meal program aimed at the homeless had to be suspended recently due to a lack of resources. However, through these doors, much good work is still done.

In the 1900’s, factories and a changing neighbourhood caused some local Anglican churches to have a drop in attendance or close. In 1909, the Bishop united St. Margaret’s and St. George’s. It proved to be a successful union of the two parishes, with a stipulation that all seats in St. George’s be free – as some churches were known to charge ‘pew rent’ for regular attendees.

The outbreak of war in 1914 was met with brave determination by Canadians everywhere, and the honor roll from St. George lists 280 names, of which more than thirty men lost their lives. As with the nation, there was barely a family in the parish unaffected. The women of the parish sent Christmas packages to all members of the congregation serving, as well as other packages and campaigns in support. Again in 1939, both men and women of the parish were deeply involved in the war effort, while also hosting members and friends of the Japanese and German communities. In 1945, the church had its 100th anniversary, amid the joy that war was over, but with much work to be done at home.

Early in the morning of February 13th, 1955, while flames engulfed the graceful building a few daring persons entered against the firemen’s orders and emerged with their arms full of silver, brass and linens. The massive brass lectern was recovered and brought back to its former shine. Young men from the Servers Guild climbed through the rubble until they reached the sanctuary to find the altar still in place. Remarkably, some linens had survived. Six men also stripped the altar away from its frozen blanket and carried it out of the ruins. It was never determined how the fire began.

The old Church stood shattered for several months until Mr. Badali and his Italian workers laboured from dawn until dusk six days a week, cleaning brick and saving it for the restoration of the parish hall. The tower and bell was saved, both as a monument to the past, and as a call to worship for the future. The cost of a new church, even a small one, was high so the main floor of the large 90 year old rectory was converted into a church until 1957, when the parish hall was ready as the new place of worship.

Spring of 1957 saw the grounds change from an area of desolation to a garden dedicated to the memory of old St. George’s and its earlier worshippers. Over the years, many groups have lovingly cared for the garden so this sacred space can be a pleasure and a means of service and fellowship for the congregation. 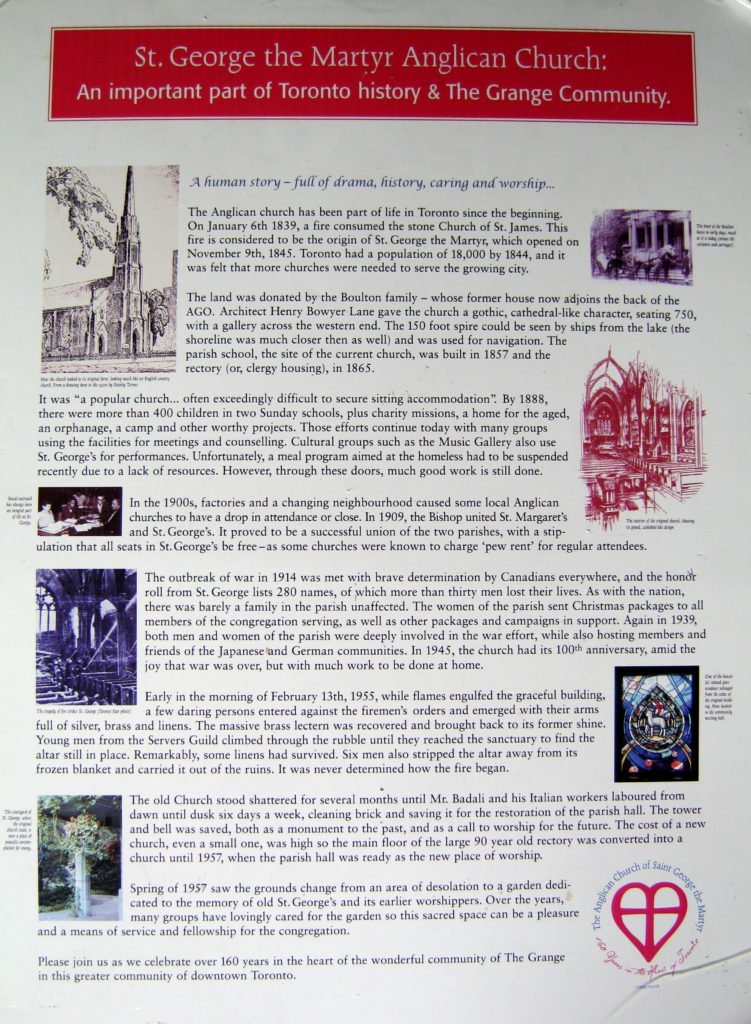 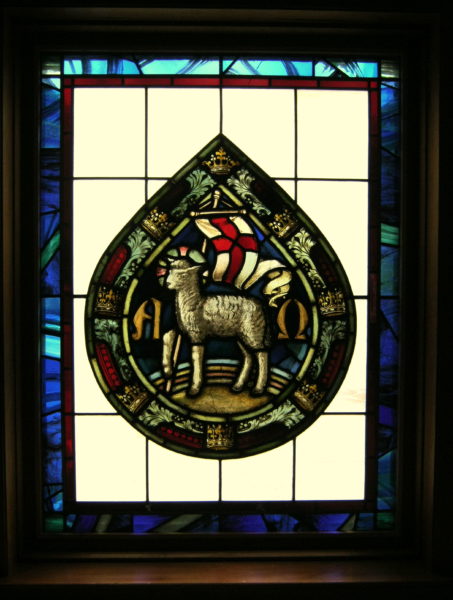 Stained glass tells a story. Seen here is an updated photo of the lamb stained glass. This curation work was done by Rosalynd Wilson, an accomplished artist and familiar face around St. George. The garden, the sanctuary, and the lobby also display her glass handiwork.